Nearly three years ago, artists Thomas Fougeirol and Jo-ey Tang began a project with the intent of turning a small storage space in Ivry-sur-Seine, a suburb just southeast of Paris, into a means of communal production.

An improvised darkroom was built and friends were invited.

The space was named Dust and the residency, The plates of the present. The name was inspired by a well-known text in The Pencil of Nature (1844–1846), a groundbreaking photographically illustrated book by William Henry Fox Talbot, the pioneer of 19th century picture making in both optical and chemical aspects of photography.

The project began in February 2013 with New York based artist G. William Webb. He completed a series of eight photograms, and as a result Thomas and Jo-ey decided that each of the following participants would continue to produce eight photograms for the archive. 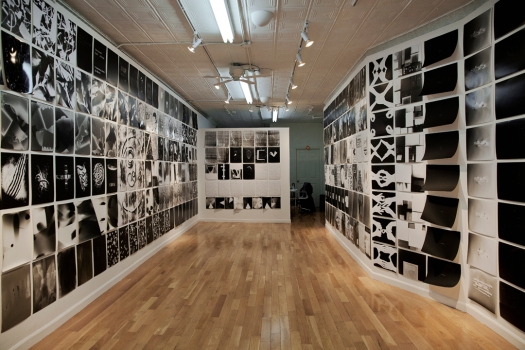 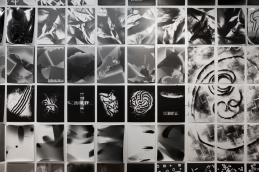 The pictures and experiences that are encountered through the process of making a photogram are invariably individual. In producing a photogram there is an immediate understanding that regardless of your desire to construct a precise image you will most often be surprised by what appears in the light sensitive emulsion. It is fitting then that Thomas and Jo-ey invite various practitioners of art, as well as literature, science, and education to participate and experiment. Furthermore, photograms have become part of the work of a number of artists since their encounter with The plates of the present.

Thomas and Jo-ey’s invitation is one that spans beyond the production of the eight photograms that become part of the ongoing archive of The plates of the present. We are invited to participate in a process that traverses the history of photographic processes…together. The proposition that Thomas and Jo-ey present embraces both the unpredictable, poetic, and performative nature of this form of image making, as well a surprising affirmation in collective practice.

The first comprehensive publication on this project will be launched alongside the opening of the exhibition, Dust: The plates of the present, February 2013 – July 2015. Published by Blonde Art Books and Secretary Press, the publication includes images from the archive and text contributions by Robin Cameron, Thomas Fougeirol, Mara Hoberman, Flora Katz, Brett Littman, and Jo-ey Tang.

Jo-ey Tang is a Hong Kong-born American curator, artist, and writer based in Paris since 2011. He received his Bachelor of Fine Arts degree from San Francisco Art Institute, and Master of Fine Arts degree from New York University Steinhardt School. He founded the curatorial project The Notary Public in 2010 in his Upper East Side apartment while attending New York University. In 2013, he curated the group exhibition Forming the Loss in Darkness at Galerie Praz-Delavallade, Paris, as part of Nouvelles Vagues, the young curators season in Paris initiated by Palais de Tokyo, and in 2014 became a curator at Palais de Tokyo and a contributing curator for the institution’s projects in 2015. He was an Edward F. Albee Foundation fellow in 2011, and the arts editor of Brooklyn-based literary journal n+1 from 2009 to 2014. His solo exhibitions include Like An Intruder, Exile, Berlin (2011); Like An Intruder, The Speaker Removes His Cap, Galerie Joseph Tang, Paris (2014); and Pant Hotel, Taylor Macklin, Hershey Beach, Galveston, Texas (2015). He is a contributor to Artforum.com.

The exhibition is part of a series of guest-curated exhibitions at BAXTER ST at CCNY resulting from an open call for proposals, and is made possible in part by generous support from public funds from the New York City Department of Cultural Affairs, in partnership with the City Council.