Recently Elizabeth Jaeger, artist and co-founder of the independent publishing group Peradam, introduced us to the artist collaborative Viele Stück and their annual calendar publication. Les Plantes Fantômes, 2013, the third planner produced by Viele Stück, is a thoughtful and complex artist book with an expiration date. We were immediately drawn to this unique project and we are so pleased to have had the opportunity to talk to Jenna Kaës, artist and member of Viele Stück, and Elizabeth, a contributor, about Les Plantes Fantômes.

Blonde Art Books: Can you tell me a little about Viele Stuck? And the most recent calendar – Les Plantes Fantomes? 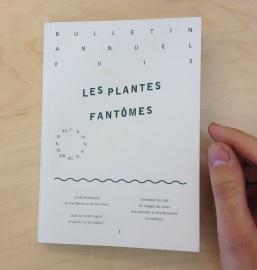 Jenna Kaës: Viele Stück is Sophie Châtellier, Johanna Himmelsbach, Jenna Kaës and Julien Raout. We formed Viele Stück in 2010, during our studies at the school of Fine Arts of Nancy. We find each other every year to make a diary. The 2013 diary, Les Plantes Fantômes, was printed in an edition of 250 copies. It is designed as a quest of one year, managed by the will to understand our deserts and dreams, and the value of hope. Every month opens on a particular territory. There are 12 different territories to travel inside, each corresponding to a month of the year. The crossing is punctuated with texts, objects and images in touch with each of the imaginary territories, each looking for an answer to the question expressed in title: Botanical study of our deserts and dreams, what is our hope and what is its value? Ten artists of our friends also participated in the construction of the 2013 diary, by trying to give answer to this question.

Elizabeth Jaeger: How have your design ideas, and Viele Stück evolved since the first planner? What has changed?

JK: Our first diary was our first experience of making a book, from its conception, to its realization as an object. We printed only 30. Because we were separated geographically, we decided to each work on a season, and to find us together in December to assemble them, and to shape the object. Today we try to think and to build the book together, even if it’s sometimes weird to work remotely on the same model.

The first two diaries were very quickly realized, during an intensive work week. Les Plantes Fantômes was more gradually built, we took time to collect more information, observations, considering a few paths to envisage our subject. In the end, it looks a lot like a report of explorations.

JK: A ghost plant could be a spectral idea, a figure of what appears and dies. The image of a season which follows the system, a perpetual and symbolic cycle made of resurrections. We are very attached to the necessity of reconsidering the importance of these systems today. It is maybe one of the major reasons which urges us to make books as diaries. The object is used, wastes away, and dies. One remains a book-archive, increased by the layer of souvenir. 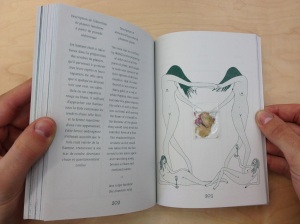 BABS: Elizabeth, can you say more about your contribution to Les Plantes Fantomes?

EJ: I found this text about an alchemic process where you burn a dead flower in a bell jar to see its ghost rise in the smoke. Tulips in the 17th century were more expensive than gold. Now cocaine is, 2 fold. Tulips also symbolize love and death in my favorite book, L’Ecume des Jours by Boris Vian. My best friend loved that book and moved to London. Jenna loves that book too and lives in France. It felt appropriate so I found tulips in the winter, enjoyed them, dried them, crushed them and stuffed them into 300 dime bags.

BABS: How did you become involved in the project?

EJ: Jenna and I met years ago sitting on separate sides of a blonde nude model. His body was lithe and somewhat awkward. We stared at him and, through his legs, each other – twice a week for four hours until finally we spoke. We had the exact same glasses. A year later Jenna flew to New York. I drove from for 4 days from the West coast to pick her up; we again had different exact same glasses. From New York we drove through the South with this random new friend who filmed us doing dances choreographed by Sarah Elliott (who wrote A-I-M-E-R:) at every rest stop (also true story, google Very Large Array Nationale). We’ve tried since to do as many cross atlantic projects as we can, which have resulted in this, and one failed project in Belgium.

BABS: Jenna, can you describe some of the contributions that are not translated into English?

JK: Most of French texts are translated into English in the end. But some texts which are not, come from literary works. For example there is an extract on the principle of “feelings crystallization” extracted from De l’Amour (1822) of Stendhal, or another from Les rêves et les moyens de les diriger (1867) written by Hervey de Saint-Denys, and describing the process of finding someone in your dreams, by the experiment of chewing a root of iris. You can also find an extract of Die Leiden des jungen Werthers (1787) from Wolfgang Goethe. 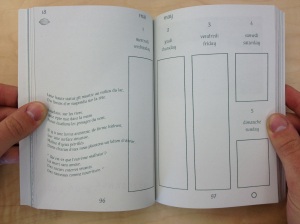 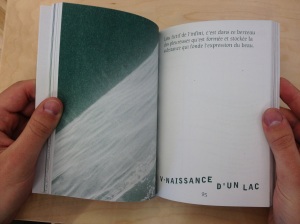 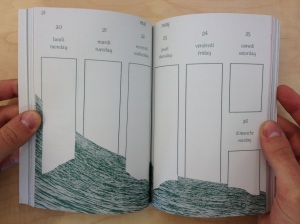 BABS: Why do you choose to use a risograph to print Les Plantes Fantômes?

JK: We invited several friends to participate in Les Plantes Fantômes, the proposals were very free, but the set became little heterogeneous and disorganized. The riso printing in one color allowed us to bring homogeneity, in one concern of reading and of aesthetic. This type of printing also brings a vague and ghostly matter, finally very close to the full spectrum.

JK: We know some people keep one as a book, and a second to use. But we tried to think about it to be used. We built it like a quest, when it is not used, this notion clearly makes less sense.

EJ: Have you seen images of past used planners?

JK: Yes, we had the opportunity to see some of them. Some are really beautiful, those which are very used, becoming annual relics. A few of them are also used as personal diaries. It’s a very private appropriation, we didn’t imagine this possibility at first.

BABS: I really like it when a calendar is referred to as a diary. I understand this is common amongst people in Europe but I think this is why I am especially drawn to Les Plantes Fantomes. There is an intimacy that the book already embodies. It inspires its owner to be thoughtful with their days. I am curious about your thoughts on the purpose of this kind of designed calendar.

JK: As explained earlier, we understood some people are using our diaries both as calendars and private diaries. The appropriation seems to have been made very naturally by people. It’s really interesting, even surprising, and wakes the disuse which was bound to the writing of the everyday life. We are very proud and touched by that. 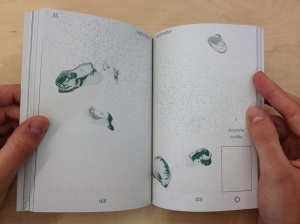 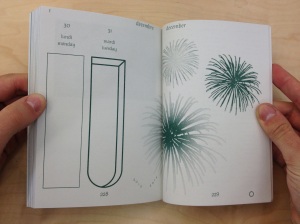 EJ: What can we expect in next years diary? What do u want to keep? What will u change?

JK: We just begun to work on the 2014’s diary. It will be about political romanticism. Changes will be more about the form : We hope to test new possibilities of printing, of binding also. Our work will be more centered on typography and layout, on colors and textures. We shall certainly find less images. What we hope to keep, is the intimacy on which you just make reference previously.