Many thanks to Shelley Burgon, Lea Bertucci, MV Carbon, and Victoria Keddie for participating in the first publication of Render Visible – a forthcoming series of zines that feature contemporary artists that work in sound art, avant-garde music and composition, improvisation and sound-based performance. This preliminary manifestation of Render Visible was published and presented for pilot press… on July 19, 2012. 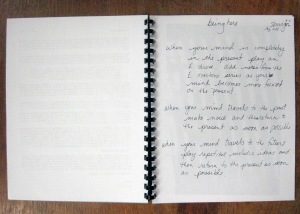 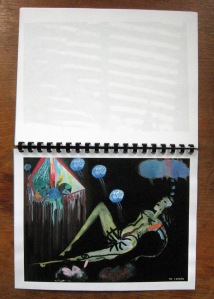 Shelley Burgon is a harpist and electronic musician based in New York. Her work centers around the sound of the harp, either as a traditional acoustic instrument in a chamber setting or as the primary sound source for her electronic music. She performs with the chamber ensemble Ne(x)tworks and solo under the name Rowan. Burgon has recorded and performed with various artists and musicians including Bjork, Merce Cunningham and Anthony Braxton. Her sound chandeliers have been exhibited in the exhibition Dead of Winter (2011) at Splatterpool Gallery, Brooklyn, NY, and most recently, Lunar Maria: Sinus & Paludes, was shown during Armory Week 2012 at the Spring Break Art Fair.

Lea Bertucci is an interdisciplinary artist who works with photography, sound, video and installation. The emphasis of her work lies in exciting the liminal areas of perception. She uses tactics such as slide projection, stop motion video and lo-fi filtering of sound to engage with these ideas. In 2009 she was awarded a residency from Smack Mellon and a Young Composer’s Commission from Roulette. She has performed solo and collaborative works at venues such as Roulette, Issue Project Room, The Kitchen, Anthology Film Archives, St. Marks Ontological-Hysteric Theater, free103point9, Galapagos Artspace, The Queens Museum of Art and the High Zero Festival.

Victoria Keddie is an artist, curator, and archivist based in New York City. She works in varying media involving film, video, sound, installation, and broadcast media. Keddie has programmed events internationally, with a focus on film, video, sound, and hybrid media. As an archivist, she focuses on preserving analog experimental sound and radio collections. Keddie is the co-director of E.S.P. TV, and also part of the film based collective, Optipus. In addition, she is the organizer and co founder of the INDEX Festival (2011), a month long international festival of media and technology.

One Reply to “Render Visible: Presentation for pilot press… and Court Square”