Erik Stinson (b. 1987 Seattle WA) is an artist, writer, filmmaker and commercial creative living in New York City. He has contributed poetry, articles and essays to DIS MAGAZINE, HTML GIANT, POOL JOURNAL, RHIZOME.ORG and THE ATLANTIC. He edits the men’s magazine SENSE EUROPA. His publications include OUR NEW YORK OFFICE (essays) 2012, DO YOU LOG IN HERE OFTEN (poetry) 2012, FUTURISM: SELECTED POEMS 2007-2010, 2010, AND THEN I DISAPPEARED AGAIN, 2011, and 4233 7TH AVE, 2011.

A selection of recent and not-so-recent poetry, essays and publications 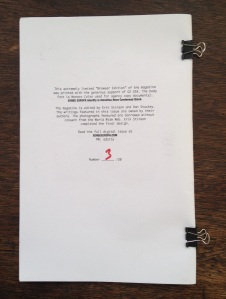 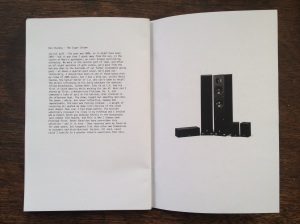 THAT PIZZA WAS REALLY GOOD.
I KNOW. DO YOU WANT SOME TEA?
YES. I’M COLD.
I CAN TELL.
IF WE HAVE SEX MY TOES WILL BE COLDER BUT I WILL BE WARMER.
I CAN’T TELL IF I AM STILL DRUNK.
I AM.
WE JUST HAD SEX.
I KNOW.
DID YOU CALL IT PIZZA?
I DON’T REMEMBER.
IS THIS THE SEX THAT PEOPLE ACTUALLY HAVE?
WHAT?
YES.

TOWARDS A NEW THEORY OF CREATIVITY, 2012
from Our New York Office (essays 2012) – available now from caveagency@gmail.com

creativity is defined as an a natural disposition, tendency, devotion, or gift, in the area of new ideas, words, and art of all three dimensions.

theory is a actionable set of values and definitions that enable someone to assess or attempt to reproduce something.

creativity is capitalism agnostic. it has neither a ‘wholesome values-oriented’ character or a ‘profit driven’ motive.

the internet has rendered originality meaningless as a strictly policed absolute, but not as a extremely valuable quality for all creative people.

the two most important things creativity must have is humor and surprise. these two qualities are related but separate.

to ‘become creative’ or ‘more creative’ there are very concrete steps that can be taken, but they are difficult and probably not worth while emotionally or monetarily. to be creative a person would require:

1. extensive knowledge of, [without imitation of] a wide variety of cultures and forms including:

this knowledge is sometimes called ‘an education’ but most educations do not include this. creative people must know about everything and at the same time actively disassociate from everything in order to grasp [the necessary remnants of what we still call] originality.

2. creative people must fit in with society. they need to participate in order to observe and reproduce desirable elements.

3. creative people must appear different in some what they identifies them as creative. this may include anything from clothing to language to place of residence. if nobody is able to identify creativity superficially, they will be unable to interact with the less superficial parts of creativity. the most important part of creativity is not ideas or productions, but knowledge and effective communication.

4. creative people must be aware that creativity is inerrant in all people and that any ‘given’ or ‘produced’ concentration of creativity within themselves is a privileged, a curse, a burden, and not a carte blanche.

5. when corporations or governments pay creative people, they do so with the understanding that anything the creative shows is morally acceptable in all fields and fit for mass reproduction on an global scale. creatives approve and reproduce social values.

6. when creative people are financially successful in a period of global pain and suffering they are effectively being paid off by governments and corporations to keep from initiating social upheaval. this is a self-aware position for creatives. creative people know good ideas alone do not make wealth. suffering and existing wealth make wealth. except as a remote possibility for prevention, creativity has nothing do to with suffering and everything to do with opportunity.

awareness of everything and mediation of position in society can reproduce creativity. responsibility exists on the part of creative people to determine the moral acceptability of everything they produce and promote under the circumstances of late capitalism.

One Reply to “Realistic Sex and More: Erik Stinson”